Who the hell recommended Glowing Heart

32 new contestants are introduced to The Dome, a place where the proceeding competition will occur. Once they meet the host, the challenge starts — and it’s not as low-down as some contestants wanted it to be. Literally.

OSO Novel is running towards something when she finds a flier advertising OSO. The shot cuts to her standing outside The Dome and she inserts the flyer into the scanner near the door. The door opens and she steps in.

The moment OSO Novel steps in, she sees Holly and Tart who invite her to walk to the center with them. However, before they could finish talking, she interrupts by completing their sentence and decides to walk alone. Tart and Holly both look at each other, confused, before following after OSO Novel.

The shot cuts yet again to Diamond and Coaster. Diamond excitedly chatters about her experiences in go-karting much to Coaster's annoyance. Penny approaches them and comments on the fact Diamond should have an easy time during the competition due to the fact she's very thrill seeking. She also reveals the fact that she only joined the competition because of her big brother, Coin.

Diamond assures Penny that they're glad she's competing. Immediately after, Nail Clippers chimes in and questions who and where the host is. Sippy Cup points upwards and asks if the person on top of the pillar is the host. The camera pans up towards to pillar to reveal a silhouette and the intro starts.

Crayon Box lowers down the platform, and introduces all 32 contestants to Open Source Objects. Guarana asks how the show is "Open Source", and CB tells him not to worry about it.

Nail Clippers proceeds to ask who Crayon Box is, and Crayon Box begins to answer, but is disturbed by Yellow Crayon, who rudely addresses Nail Clippers' question, causing a fight with Blue Crayon, Green Crayon, and Red Crayon. Crayon Box closes herself to stop the fighting.

Crayon Box brings the contestants to the middle of the dome to tell them about the first challenge. In the challenge, the contestants will be suspended in the air with balloons, and will have to find a way to the ground. The 8 contestants who don't do it in time will be up for elimination.

Paintball complains about not being able to get down, and Vape reassures her that he'll be able to help as long as she doesn't fly up too high.

The contestants get their balloons, and a horn goes off, sounding off the challenge.

Guarana and Graffiti, upset that they can't get down safely, team up to sabotage the other contestants while they think up a way to get Graffiti down.

Diamond proceeds to continue bragging to an uninterested Coaster, until Diamond nearly falls, causing Coaster to go after her to prevent from falling and breaking. They start floating down.

Cologne and Glowing Heart run into each other, Cologne offering to help Glowing Heart after finding out that, despite her flying abilities, she's afraid of heights.

After Vape loses track of Paintball, Graffiti continues to sabotage contestants, Server his next target. Guarana tells Graffiti that he's bored and proceeds to get down. Server notices Graffiti, and proceeds to pop all of his balloons, falling to the floor. Crayon Box says that because he died, he's automatically up for elimination.

Corny pulls out a anvil, and floats down with it, along with Holly and Tart. Blob slips out of his balloon and falls into Pitcher, calming him down, and falling onto Corny, who let's go of the anvil and falls to his death.

Loren proceeds to struggle to get out of the balloons, but gets himself tied in several knots, causing himself to get stuck.

Retainer, Coin, Penny, Incense Holder, and Roulette Wheel, attempt to get down, but then realize the amount of difficulty there is in that because of being armless. They end up spotting Organic Fruit and Grain Bar, and pester him for help.

Phonograph, Server, and Extension Cord, all manage to get down. Server walks over to Inhaler, who suggests they continue a conversation they were having.

Retainer, Coin, Penny, Incense Holder, and Roulette Wheel continue to struggle with getting down. OSO Novel spots them, and Penny asks her if she can help them. OSO Novel ends up getting pushed away by OFAG Bar, saying it was a "scripted event" anyway. She proceeds to pop her balloons and floats down.

Microphone takes off his balloons and pops Black Square's balloons as well, causing them both to fall and die.

Meanwhile, back with the armless five, Roulette Wheel, Incense Holder, and Coin begin to lose hope, but they then spot Nail Clippers and ask her for help. However, Nail Clippers fails to do this, and instead, resorts to untying Incense Holder's knot, causing them to fall to the ground and break.

********/Censored pops his balloons and falls, surviving. Putty proceeds to get down as well. After some falling, Diamond and Coaster also reach the ground safely.

Meanwhile, Pink, White, and Green Dango argue on how to get down to the ground. Coin, Penny, Roulette Wheel, Nail Clippers, and Retainer fly over to them, and Penny asks them to help them get down. Dango proceeds to pop all their balloons and unties theirs as well.

Crayon Box asks about the state of the challenge, and is told that 23 made it down, 4 people still in the air (Loren, Organic Fruit and Grain Bar, Paintball, and Sippy Cup) and 5 people who ended up dying while attempting to get down (Microphone, Corny, Graffiti, Black Square, Incense Holder). Crayon Box then determines that there's only one spot left.

Sippy Cup is asked by Phonograph to get down, and proceeds to try and untie the balloon. Paintball decides break her knot off the balloon with her mouth and begins to fall down, regretting the idea. Sippy Cup gets the knot undone, and begins to float down, one balloon less. That balloon floats up and catches Paintball, causing her to float up again.

Sippy Cup eventually reaches the ground and earns the last spot for immunity, meaning that Loren, Paintball Organic Fruit and Grain Bar, Microphone, Corny, Graffiti, Black Square, and Incense Holder were up for elimination and would be voted on by the viewers to be eliminated next episode.

Here's a table showing the order in which contestants were declared safe/unsafe:

Loren looks at the viewers and tells them that they can help on the show as well with elements like animation, writing, music, and more, just by joining the discord server.

At night, Paintball is still on the balloon, up in the air, as she sighs. 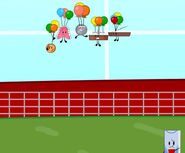