Vape is a male character competing in Open Source Objects.

He is a nonchalant hippie who takes most things less seriously than he likely should and often ends up diminishing other's concerns without a guarantee that things will work out well. Vape is very forgetful and easily distracted, he ends up not following through on some of his promises due to his mind wandering, and while that's not necessarily malicious, he still internalizes issues over not being reliable and not being a good friend, thinking he can't get better. He is good friends with Inhaler.

Vape is a rectangular, grey vape with a purple inside, and a cylindrical, metal, multicolored top. He also has two buttons on his left side (your right side). His mouthpiece is grey, and his e-juice is a transparent pale yellow. His atomizer is grey with a thin gold stripe.

Vape first speaks before the challenge to offer help to Paintball. However, separated by a crowd of people, Vape is unable to reach Paintball in time before she floats too high. Later on, Vape becomes frustrated with Server's complaints of Corny's anvil antics. Vape then pops one of his two remaining balloons (out of an original three). Vape makes it down safely.

When there's one safe spot left, Vape worries for Paintball, who managed to float to the top of the dome.

After being rejected by Paintball when he goes to her to pair up for the challenge, Inhaler attempts to get Vape's attention by assuring him Server is very reliable, so Paintball will be safe with him. Vape ignores Inhaler and tries to walk away, but Inhaler persists and asks if Vape wants to team up, to which Vape agrees to.

During the contest, Vape becomes increasingly annoyed after having to listen to Inhaler spout useless facts about armadillos over and over again. When Inhaler is explaining that armadillos have terrible eyesight, he takes off his glasses to demonstrate that they can barely see better than he can without his glasses. While he is doing this, he is hit in the back by a ball that Graffiti launched, and falls off of Vape, putting the pair up for elimination.

In the elimination, he manages to become safe with 147 votes. For the challenge, he was placed on Red Crayon‘s team, and he was asking Red about when is break time because he wanted to know for later.

For the play, he only played a small role as the house’s chimney.

In the Challenge, he was just laying around with Microphone. When Coaster sees them just laying around do nothing, she confronts them and reminds them that they have a challenge to win. Vape says he rather not bother nature. Afterwards, Microphone pointed out that Phonograph was handing out freebieS. Vape said that he was not interested. After that, he said to Microphone that his quips needed working out after repeating Coaster’s quote.

During the Contest, Paintball and Roulette Wheel frame him by putting a dead butterfly beside him and telling Red Crayon on him. After Red confronts him about the butterfly, he gets confused on how that got there and explains that he wouldn’t hurt a fly. Then, he asks Paintball to back him up on his explanation, but she refused to back him up and continued to blame him. After that, he was put up for elimination. 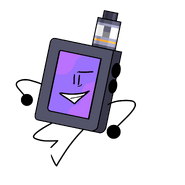 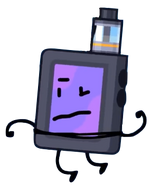 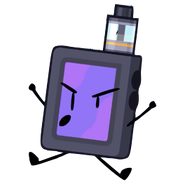 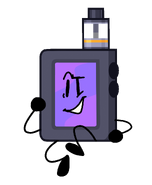 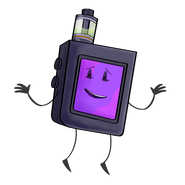 OSO 4 intro
Add a photo to this gallery