The Dome is the main location for Open Source Objects where the show's contestants compete. The Dome first appeared in OSO 1, but also appears in the show's intro. The dome is used by Crayon Box to set up challenges in each episode and stage eliminations through the Central Building.

Humorously, locations within the Dome seem to appear whenever needed by Crayon Box, which she never explains - for example, in OSO 2 when Incense Holder asks Crayon Box, "Where did [the central building] come from?" only to be waved aside by her. This might suggest that the Dome has other hidden locations within it not seen yet.

Contestants that leave the dome are placed on a ranking board and announced to the whole dome. This appears to be an automatic process, as when Loren leaves the competition in Episode 2 despite not being the one eliminated, the ranking board still records his depart. 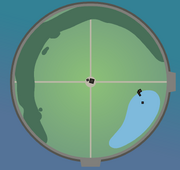 Top-down layout of the Dome.

Add a photo to this gallery
OSO Episodes
Retrieved from "https://open-source-objects.fandom.com/wiki/The_Dome?oldid=12420"
Community content is available under CC-BY-SA unless otherwise noted.