Phonograph is a female character competing in Open Source Objects.

Phonograph is very sensible and usually has extremely good advice, however she always runs out of record when she speaks, so she sometimes gets cut off in the middle of her sentences. Despite this, no one takes her very seriously besides her closer friends. She is wise and honest. She can never tell a lie and is bad with secrets. At times she is too trusting of people, causing her much grief when people break her trust. She is not a hateful person, and is known to be quite calm.

She is an unsaturated maroon color at the base and a brownish-gold speaker. On her left side is a handle while on the right is her arm. She has a black record placed on top of her.

Phonograph plays a minor role in her debut. She is first seen plummeting from the sky alongside Extension Cord, whom she apparently helped. Later on, Phonograph urges Sippy Cup to hurry up and get down to avoid being up for elimination, though her advice is interrupted by a record scratch.

In "Your Opinion is Invalid", Phonograph teams up with Holly, whom immediately pulls out a Christmas vinyl and replaces Phonograph's own vinyl. Holly runs along the vinyl, rendering Phonograph unable to speak. The two encounter Roulette Wheel and Retainer as the competition continues, and both manage to win in the end. 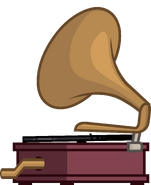 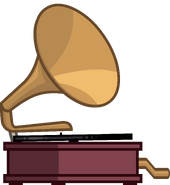 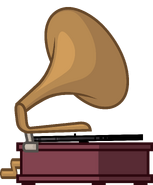 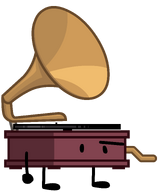 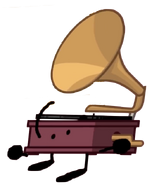 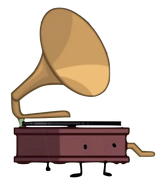 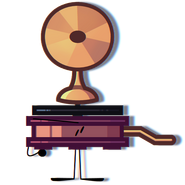 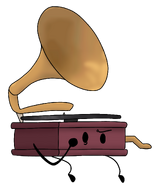 OSO 4 intro pose
Add a photo to this gallery