Up For Elimination Count

Talking about being a professional singer

Trying to be positive

Holly is a female character competing in Open Source Objects.

Sings and talks about being a professional singer. She is not that bad at singing, though. Her personality reeks of a kind person. She is good at following directions and helping her teammates. She is loud and proud. She is obsessed with music and is very knowledgeable about every genre of music. She is a very good dancer and she is very confident about it. She is very friendly. She always tries to be positive. Her outlet is dancing. She often feels good about herself, trying to win challenges with a creative solution. Sometimes she goes a little overboard though, putting creativity before thought.

Holly is a small, vivid red mistletoe with two spiky, green leaves protruding from her backside.

Holly appears early on, spotting OSO Novel entering the dome, where she voices relief that the final contestant arrived. She is slightly perplexed when OSO Novel passes on the opportunity to walk together. During the challenge, she groups with Tart, Corny, and Vape. She and the former two latch onto Corny's anvil. She is shocked when Pitcher boots Corny off the anvil, but she otherwise makes it to the ground safely and without much trouble.

Episode 2 - “Your Opinion is Invalid”

After she failed attempt to pair up with Glowing Heart, Holly goes on to pair up with Phonograph, but instead of Phonograph’s own vinyl, Holly decides to use her own Christmas vinyl, which renders Phonograph unable to speak without her original vinyl. Holly is then seen running along with the record, playing distorted festive music. They encounter another pair, more specifically Retainer and Roulette Wheel, and both pairs win the contest.

At the start of the challenge Holly got put onto Green Crayon's team when objects were submitting ideas, Holly came up with the idea of a musical but got rejected by everyone. Despite knowing this, she still attempted to do so. She was teaching Retainer a little song when Phonograph came up to her and asked for how she can help. She said that she can play the background music, but she was hesitant since she wanted to be actually acting, however, she accepted it. Later, Retainer asks Holly for help, because he kept on forgetting his lines, she told him he could write it down on his hands, however, he was forgetting the entire script and didn't have hands. When the time for the play came, Phonograph was doing her spiel, when Holly interrupted her, coming on stage and singing. Retainer comes running out saying that she's not supposed to sing. When Corny threw the boulder, she said that Retainer saved him. After Diamond makes a weird noise, Holly asks what she's doing, and she says that she's doing sound effects. When Coaster grabs Diamond and says that they don't have anything to stop him, Holly says that they do, stating that she's her long-lost wife and that the most powerful weapon is love, however before she could finish, Retainer kicks her.

This article is a stub. You can help Open Source Objects Wiki by expanding it. 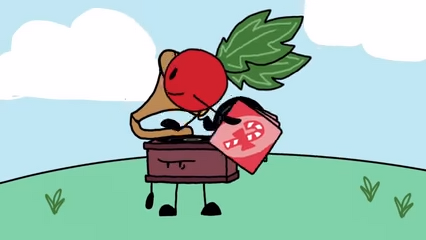