Otherwise known as Goplu, he is famous for being the only person to ever receive the Hunk of the Year award every year since the award's inception.

Goplu has been seen punching both good guys and bad guys in the face in an impressive display of rational centrism. It is said that if Goplu were to see a murderer, he would stop the murderer but also then stop the murderee. This is very brave, and people like him for doing this.

Goplu is the only known contributor to have died of cardiac arrest.

Many people will refuse to look at you if you mention Goplu. If this ever happens to you, do not worry. This is a natural response in nature to threat. Some people end up confusing people who say Goplu for people who actually are Goplu. This is being investigated by authorities.

Goplu is a moderator on the OSO Discord. While this may be surprising to some, those who don't have tiny, smooth brains will react positively to this information. 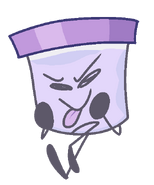 Retrieved from "https://open-source-objects.fandom.com/wiki/GopluXPoplu?oldid=8019"
Community content is available under CC-BY-SA unless otherwise noted.